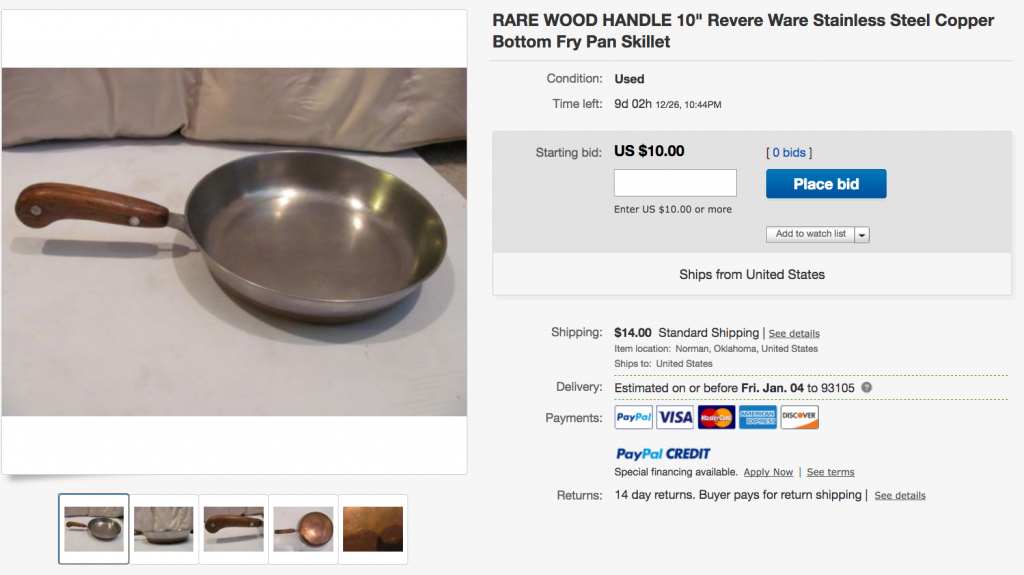 It’s a beautiful handle, which gives the skillet a very pleasing and unique appearance. 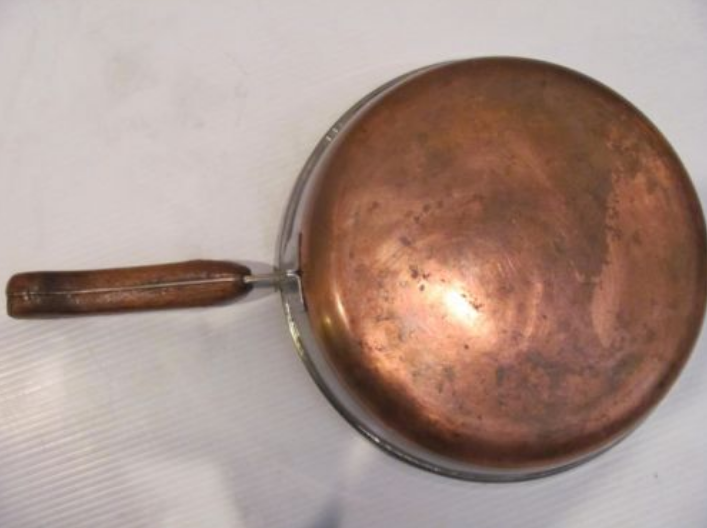 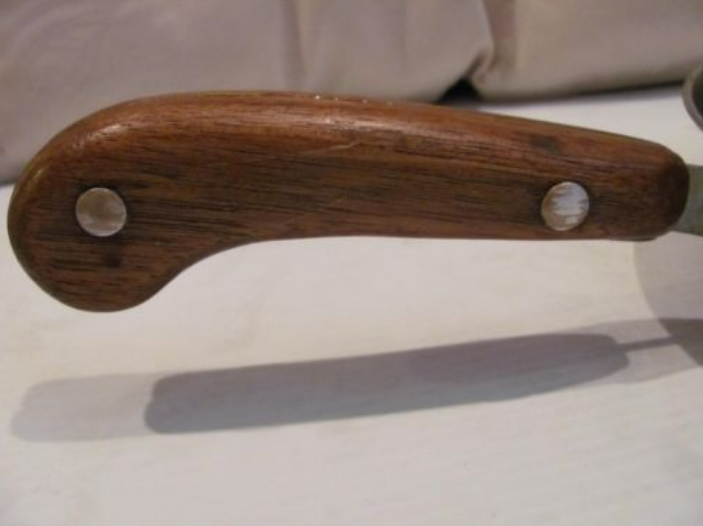 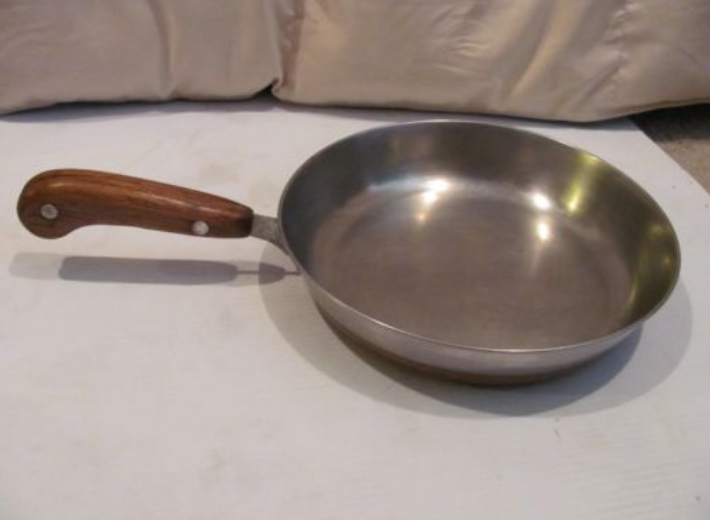 You can see from the handle detail that this is a very old skillet, made within the first few years of Revere Ware production.

The spline, rather than being a straight piece on those handles, was the same shape as the actual handle.  This was the style that had two screws close to the pot, and a third screw in the center of the end, where the hook went through.  It appears as if this customization used the two screws for near the pot end, to hold the handle, forgoing the hook.  Here is a blurb on adapting our newer style handles to that older style spline.

Everything about this handle, including the workmanship, tells me this is something that would not have been offered by Revere Ware, but was custom made by someone who probably could not get a replacement handle.

Before we started selling our parts, we saw a lot of funky attempts to continue using Revere Ware pots despite handle issues.

Because of this, when we first opened our shop for replacement Revere Ware parts, we got a lot of appreciation emails from customers.  While we still get one now and again, dealing with customers on Amazon.com has turned into a very different experience.  People are quick to pull the trigger on negative feedback over any issue, no matter how small, without even contacting us first for assistance, and then rarely respond when we follow with an offer to help after seeing their feedback.

We sell somewhere in the neighborhood of 10,000 parts a year these days across about 6,500 customers.  In our mind, that is 6,500 people we’ve had the opportunity to help continue to use their cherished piece of cookware.  We also answer somewhere between 500 and 1000 questions each year for people, whether they are customers or not.  The nature of a business like ours is service more than product.  Service to help people find the right part, service to answer questions and sometimes solve a historical mystery, and service to solve problems when they arise.

Retailing used to be about service.  Consider this bit from an article today in the Wall Street Journal:

Long before internet shopping, when a personal touch and pride of proprietorship were essential to successful local merchandising, Robert Lazarus Sr. was the president of the largest department store in Columbus, Ohio, my hometown. His name was on the building: the F&R Lazarus Co., among the most prestigious stores in the Midwest.

A dignified, respected man, he lived in a grand and tastefully decorated house. He kept his home number listed in the phone book.

Here is something his son told me, years after Robert Lazarus had died, and the store had disappeared.

One evening when the son was growing up, the telephone in their home rang. The caller, with nervousness in his voice, asked for Robert Lazarus, who came to the phone.

The man, almost apologetically, said he and his wife had purchased a tea set at Lazarus. They had never owned one before, but saw it on display and decided it was something they would like to have in their home.

Robert Lazarus waited to hear what was coming next. Was there a flaw? Was a cup or saucer broken?

That wasn’t it. The man said he and his wife did not know the proper way to serve tea—how to make use of the tea set when company came over. They sensed there was an etiquette to it, but no one had ever told them what it was.

Some of Lazarus’s customers had very modest incomes; to them, that downtown store was almost a palace, a place of aspiration, even if they were only looking. The tea set had represented a step up, a significant expenditure for this man and his wife. And they weren’t quite sure how it was intended to be used.

So the husband called the man whose name was on the store—at home, at night—for advice.

Robert Lazarus, his son said, stayed on the phone with his customer and, with great care, walked him through the steps of having a tea party, of using an elegant tea set. He told the man stories about tea receptions he and his own wife had given; he answered every question.

Then, before hanging up, he thanked the man profusely for having shopped at Lazarus.

I asked the son—by then an elderly man himself—if his dad had seemed at all bothered to have received the call in the middle of an evening with his family.

“Bothered?” the son said. “He couldn’t have been more pleased. He talked about it with great fondness for the rest of the night.”

I imagine the man who had placed the call did, too: The man who, in a time before customer service meant algorithm-generated email responses and endless waits for offshore call centers to answer, had taken a deep breath and dialed the phone, not knowing if he was making a mistake by imposing.

And who had been greeted, by the president of the F&R Lazarus Co., like an old friend.

Sometimes, dealing with customers on Amazon.com almost makes me want to quite the business.  I got in this business because I wanted to help people in a way that I wanted help myself years ago when I was looking for replacement parts for my Revere Ware.  With less business going to our website, where we have very few returns, almost no complaints, and the occasional praise, and more business going to Amazon.com, where we constantly struggle against abrupt and inconsiderate negative feedback and rarely a kind word, it is more of a burden and less of a joy these days.

While I love the convenience of ordering online and the benefit of being able to find things that used to be impossible to find, I had the impersonality of it all.  Perhaps this is what can save the malls and local businesses against the onslaught of  online shopping, good customer service and a very personal experience.

I’m trying to do my little part to keep business more personal.  While you can’t call me at home, I do answer every question, no matter how stupid you might think it is, frequently even during evenings and on weekends, and I try to make every customer happy if I can.