Revere Ware Parts :: News
By RevereWareParts on June 20, 2022 in History

Reader Kevin approached us for information about this interesting cauldron.

Hi I recently purchased this Revere copper pot/caldron and it has the makers mark “MADE OF REVERE SOLID COPPER “. Would you know the date this pot was made? I can’t find any mark like this on line with a date. 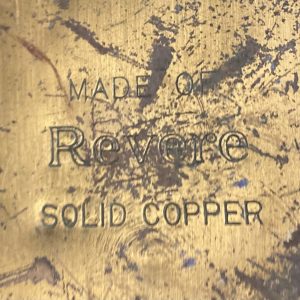 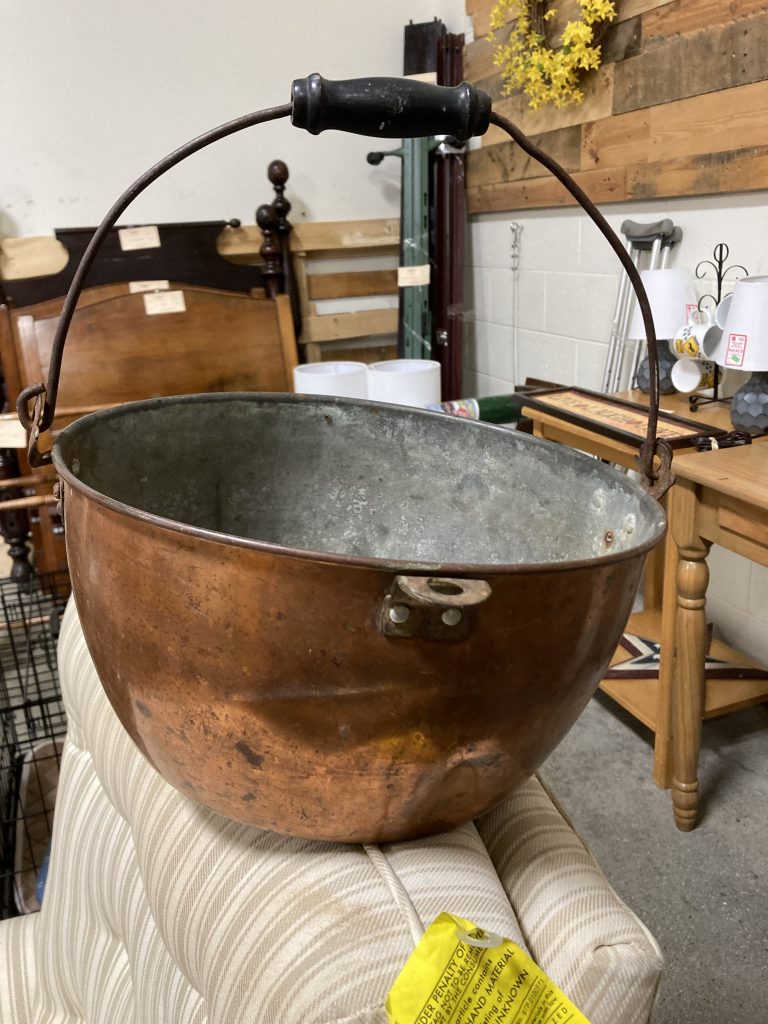 From the stamp on the bottom I believe that is before the Revere Ware cookware era. My best guess would be in the early 1900’s, sometime
before 1928.  As far as I know post 1928 stamps included the word Rome as 1928 there was a merger with Rome Brass & Copper.
Does anyone else know anything more (or have better information) on these?
0
By RevereWareParts on June 14, 2022 in RevereWareParts.com

There is a lot of information I’ve compiled on this website, and I do occasionally make typos.  Sometimes readers are kind enough to point them out, like reader Terry.

PS:  I believe the third paragraph; first line, of the Cleaning & Care Information page has a spelling error:  buffing oils arc likely
Also, under CARE OF REVERE WARE, the first paragraph ends with:  We recommend
and nothing after.

Very helpful, and easily fixed.  On the other hand, I also sometimes receive comments like this:

Please do correct the incorrect use of it’s. It’s should not be used unless you mean “it is.”

Yes, that’s all the information they gave me.  If you do find a typo, please let me know the specific page it is on. 🙂
0
By RevereWareParts on June 5, 2022 in Care, Tips

“Hello!”  I purchased a small old-style fry pan in an “antique” store.  There is no copper on the bottom.  Unfortunately, my husband decided to use it – on high – and seared grease into it!
I have tried Brillo/SOS; baking soda; soaking.  What will get this grease sear off?
“Thank You!”

In terms of burnt on grease, what I’ve used for grease splatters on the outside of tea kettles is to put some water in it, heat it up (to make the grease stains hot) and then use some Bar Keepers Friend (a fine polishing powder) to polish them away.
Dealing with burnt on grease on the inside of a probably poses more difficulty because it isn’t a finely polishes surface like the outside; It may have started that way, but years of metal utensils and acidic foods can leave the inside of the pan with many pits and grooves for the grease hid in.  Still, the same trick may work, with a little more elbow grease.
My recommendation is to heat the pan slightly, and then give it a good scrubbing with a green Scotch Brite pad and some soap and water.  Then heat it up again and give it a good polishing with Bar Keepers Friend.  If this doesn’t get all the grease stains off, repeat as often as necessary.
The only thing to watch out for is, with a heated pan, don’t douse it with cold water as you will risk warping it.  Better to heat the pan mildly and use some warm water for the soap and water part, and any rinsing.
0
By RevereWareParts on May 30, 2022 in Ebay

Since 2009, I’ve been providing the revereware.org site, which categorizes all the Revere Ware listings on eBay to help more easily find Revere Ware items.  Along with that, we’ve been keeping track of the total number of listings for Revere Ware items.  But this process has been fraught over the years.  Every once in a while, eBay will change it’s website format / design and the code we’ve written to capture the total number of listings changes, and we fail to get a valid number; this has happened perhaps 3 or 4 times in the last decade.

The latest issue to crop up is that eBay seems to no longer report the actual number of listings that a search returns, and instead returns something like this:

As of a few days ago, it reported 14,000+ so it isn’t clear if there are that many fewer items or they just changed what they report.  Doing other searches shows similar, but different results.

You can see this in the chunkiness of our graph as of late.

Perhaps there is a technical decision eBay made that resulted in this change, but it sure makes our tracking of listing numbers more difficult. 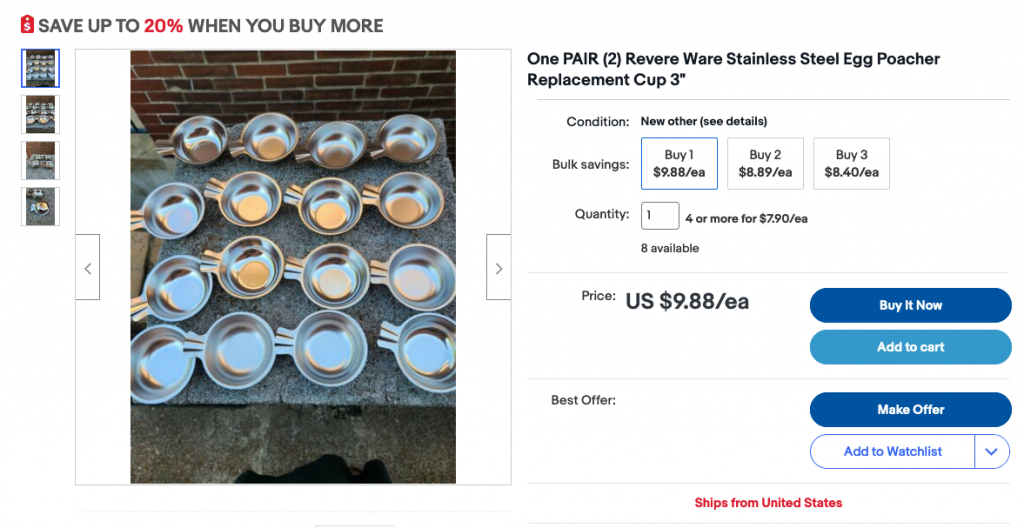 While I see exorbitant prices on new old stock items on eBay all the time, it is hard to tell whether or not people are actually willing to pay a really high amount for the privilege of experiencing new Revere Ware, especially because many of the items are from the 80’s and 90’s, when the quality of items was sub-standard, not exactly the glory days of Revere Ware.

So it is interesting to see an auction for a new in box tea kettle; an auction tells us what someone is actually willing to pay.

A clue to the age of the kettle can be found on the bottom of the box. 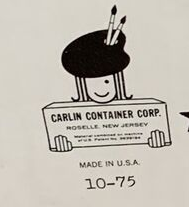 I take that as 1975.  While Revere Ware might have started making the tea kettles with a thinner copper layer on the bottom after 1968, like they did with their copper bottom cookware, I’ve never found much difference in the pre and post-1968 era kettles, so 1975 is as good as any year in my mind.

Given the rarity of new Revere Ware kettles these days, $114.5 seems like a reasonable price to me.  But that’s about 10 times what is originally sold for. 🙂 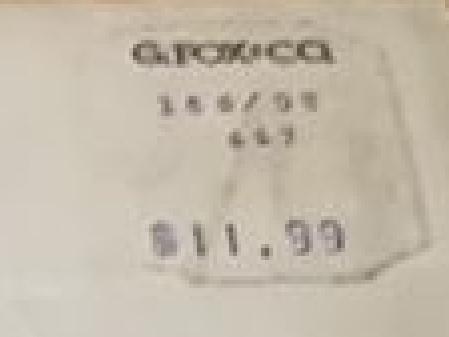 Reader Harold contacted us with this question:

My mother has some revere ware.  I am noting some blistering on the bottom of the pan.  Photo attached.  What is causing this? 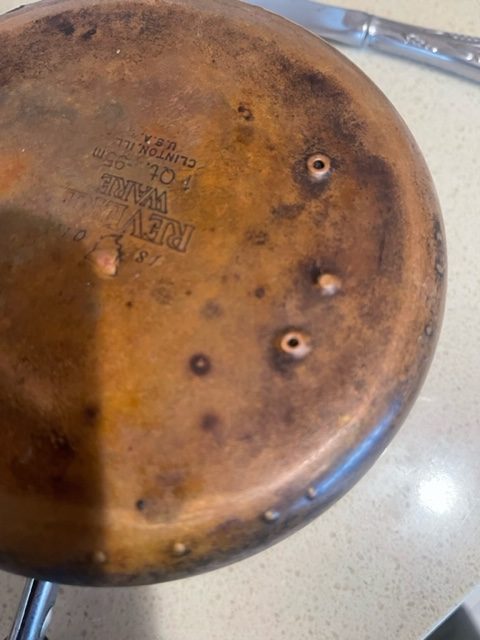 I suspect it is due to defects in the manufacturing process.  If moisture gets trapped between the layers of metal (copper, stainless) it can expand when heated and case the blistering.  Given the style of the piece, it was made during the period where the Revere Ware quality was not super great (post 1968), and there are a higher number of defects like this as compared to the period prior to 1968.
I suspect the blistering doesn’t affect the usage of the pan too much, except for hot spots where the blisters occur.
0
By RevereWareParts on April 21, 2022 in Ebay

If you tend to wax nostalgic (like me) you’ll appreciate this brand new vintage electric coffee pot, I’m guessing from the 1970’s.  Imaging unboxing this and making a nice cup of percolated coffee like you just brought it home from Sears.

We get a fair amount of inquiries for the Revere copper cleaner.  As far as we know it has been out of production for some time now, and isn’t available.

If you really really love it more than any other copper cleaner, there is one package available on eBay right now. 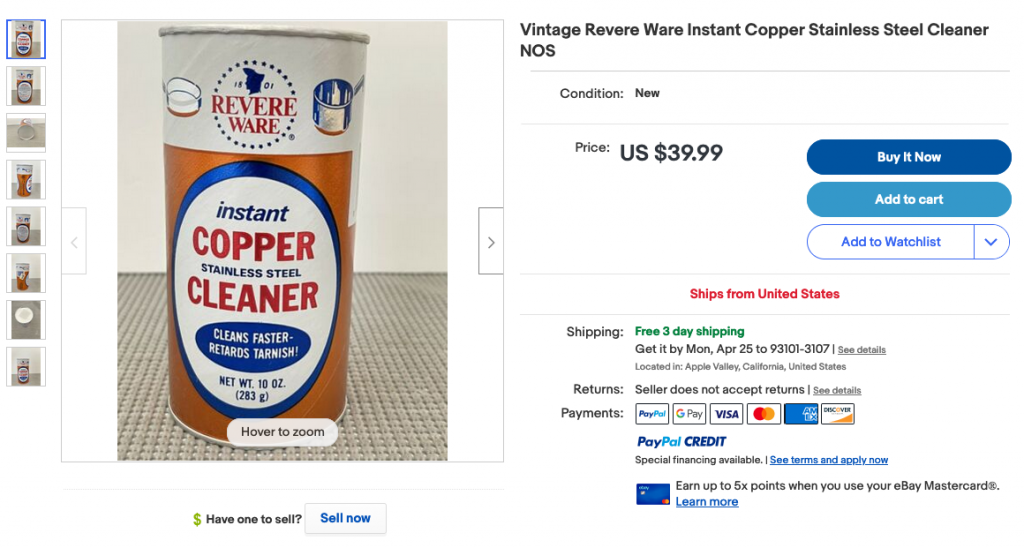 I was a bachelor for quite some time before getting married and having kids, and I learned a lot of domestic tricks during that time.  One of them was to never put anything aluminum in the dishwasher.  If you do, you will be sorely disappointed.  The basket assembly on the Revere Ware percolators is indeed aluminum.
The high temperatures and harsh chemicals of the dishwasher (see our recent article on drinking glasses) cause the aluminum to oxidize, coating it with very unattractive black layer. Here is a poor guy from Reddit who put is Bialetti espresso maker in the dishwasher. 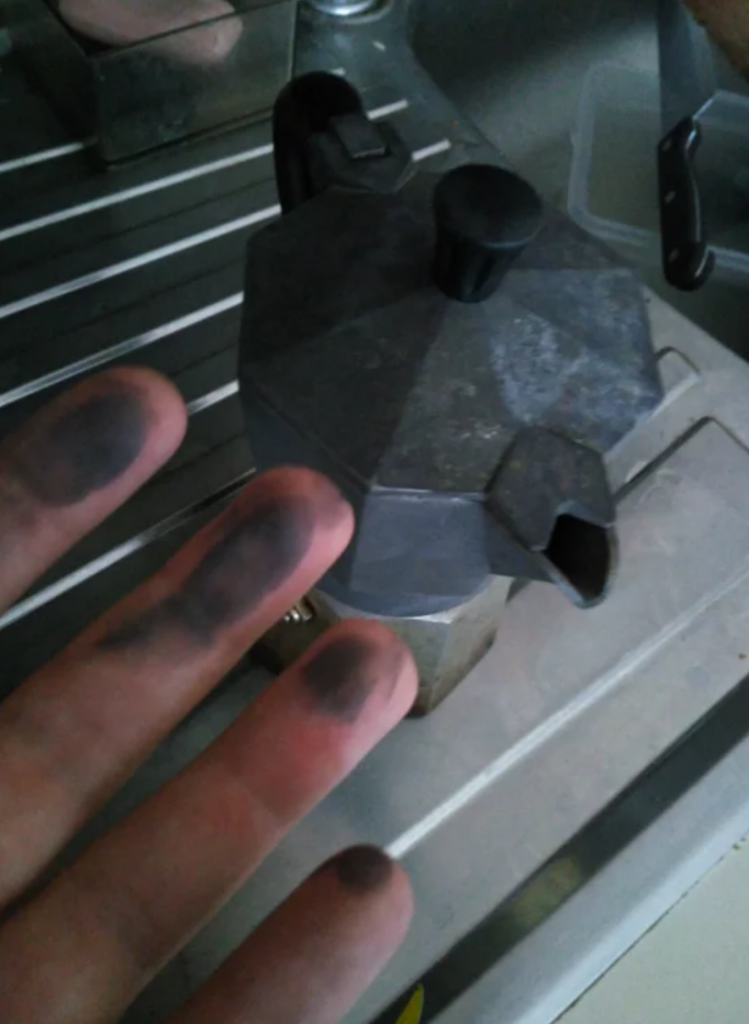 As it is explained there:
This is caused by a chemical reaction between the soap and the aluminum producing Hydrogen. The reaction is exacerbated by the lack of phosphates in the detergent, high temperature water, and long soak time in the dishwasher.
So what do you do if you’ve made the mistake of putting a prized aluminum piece in the dishwasher?  I’ve always used something like a green Scotch Brite pad to physically scrub the oxidation off.  If you have a piece that used to be shiny, this will definitely dull the shine, which you can try to restore using Bar Keepers Friend.
I found this blog post that suggests using vinegar to remove the black layer, but I haven’t tried it (because I no longer put my aluminum in the dishwasher ha ha); they also have some other useful suggestions.
The best tip though is to just avoid putting aluminum in the dishwasher.
Oh, and wooden items too; they will swell up and won’t be the same ever again.
0
1 2 … 46 Next →