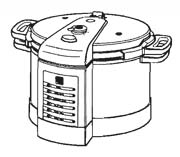 I have a PC-806 pressure cooker, the pressure regular is missing (probably got lost during removal-and-cleaning, is there a replacement part I can buy

It is almost certain those pressure cookers were not actually made by Revere but were re-branded units made by another company, like Cuisinart.  You might try calling them.  You also might try looking/asking at Miss Vickie’s, a forum and recipe website for pressure cookers.

Also, this supplier in Australia has the best selection of pressure cooker parts we’ve seen.

6
By RevereWareParts on January 19, 2013 in Interesting

Those of us who have been using our Vintage or other Revere Ware pressure cookers for years know how useful they are.  I find them much better at cooking artichokes than simple steaming.  My mother still makes (what she calls) Spanish rice in her pressure cooker (54 years old) that is fantastic.

It looks like the culinary set is taking notice of the lowly pressure cooker (once again) as evidenced by an article in the Weekend Edition of the Wall Street Journal (The Pressure Cooker is On).

Chef John Currence of City Grocery in Oxford, Miss., said he once disdained pressure cookers as emblematic of “the great culinary shame” of the 1960s and ’70s, the era of canned food and quick casseroles. But now he uses a pressure cooker to braise pork roasts, short ribs and beef blade roasts, and considers it essential for maintaining the shape and texture of legumes. “The greatest upside of the pressure cooker is the intensity of flavor,” said Mr. Currence.

Jason Fox of San Francisco’s Commonwealth uses a pressure cooker to infuse lemon verbena into plums and to make a roasted chicken broth in just 30 minutes. “Under pressure, everything stays in there, it’s not evaporating,” Mr. Fox said.

“Modernist Cuisine,” a five-volume work on innovative cooking published by former Microsoft executive Nathan Myhrvold in 2011, boldly states that pressure cookers are the best equipment for making stocks—a cornerstone of classical cuisine—because they can cook at high temperature without boiling, which causes fats to emulsify and makes stocks cloudy. Phillip Lopez of Root in New Orleans said he read “Modernist Cuisine” voraciously and was surprised by its endorsement of a piece of equipment he considered fit only for canning. Soon after, at an International Culinary Center conference in New York, Mr. Lopez found he wasn’t alone. “Everyone was talking about them,” he said.

Mr. Lopez soon developed a method for infusing Japanese dashi broth with the aroma of burned hickory wood by cooking it under high pressure for an hour. He also tosses in a small amount of expensive or exotic ingredients, such as star anise and black cardamom, and uses them to turn veal shanks and other tough cuts of meat into luxurious, potently spiced dishes.

Kuhn Rikon, a Swiss maker of high-quality pressure cookers, reports that sales have increased by about 25% since 2000. In the past five years, a multitude of pressure cooker cookbooks have hit the market, including a 2009 reprint of Lorna Sass’s definitive “Cooking Under Pressure.” Several websites, including the encyclopedic missvickie.com, offer recipes and tips.

Often confused with slow cookers, which cook at low temperatures over lengthy periods to allow for unattended cooking, pressure cookers actually function in the opposite way. They work by creating an environment in which water boils at a higher temperature than in a conventional pot. Steam inside the cooker forces its way through the food, cooking quickly and at high heat. Because there is no heat loss during cooking, and because food cooks so much faster, pressure cookers require far less energy than conventional cooking. Stews and braises that might require three hours in an oven take as little as 15 to 30 minutes; risotto takes about five.

Sang Yoon, chef of Father’s Office and Lukshon in Los Angeles, says he is puzzled that even more cooks haven’t come around. “The pressure cooker is an awesome thing because you can literally beat the laws of physics,” he said. “It is a simple device that modifies atmosphere, which means you can do all sorts of playful things.”

From the list of pressure cookers they’ve reviewed in their test kitchen, you’ll pay anywhere from $50 to almost $300 for a pressure cooker, or, you could just get a used vintage Revere Ware pressure cooker from Ebay for a little as 20 bucks.

Incidentally, the electric model by Cuisinart they’ve reviewed is strikingly similar to one Revere sold in the last decade, and obviously something they simply branded from another company, probably Cuisinart.  I’ve got one but have yet to try it.  The combination of electric and pressure cooker is very appealing as perhaps a better Crock Pot (yes, I’ve got a vintage one of those too).