Revere Ware Parts :: Tips :: The etching of glasses in the dishwasher, and what to do about it
By RevereWareParts on April 6, 2022 in Tips

TL;DR to solve the etching of glassware, we are using half as much detergent and running a shorter dishwasher cycle.

For years now we’ve experienced the slow fogging of our drinking glasses.  At one time we thought perhaps it was that we had bought cheap glasses, so we bought some better ones, but experience the same thing.  We thought perhaps it was hard water deposits, even though we have a softener, but soaking in vinegar and scrubbing didn’t make a difference; the glasses are definitely getting etched. 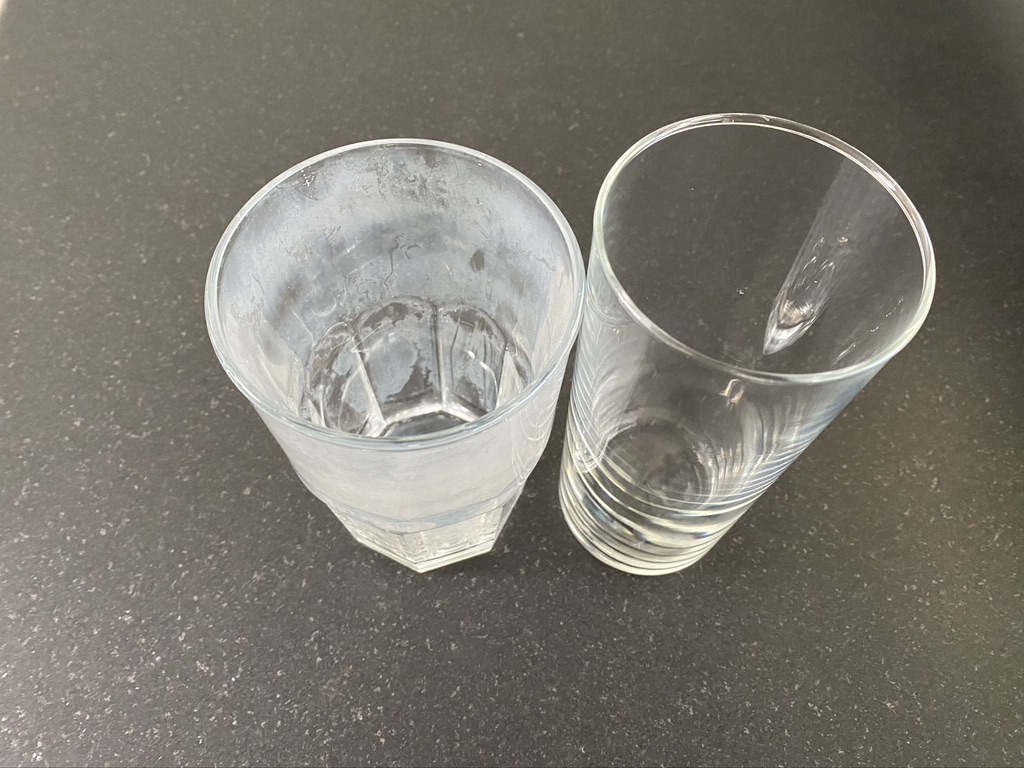 Now, to be sure, it definitely does affect some glasses and not others.  But we can’t seem to figure out why.  Some inexpensive glasses are not affected while other expensive ones are.

Some resources we found identified phosphates as the culprit, but most detergents have been phosphate free for some time. And we were using two of Consumer Reports top detergent brands.

Like many lingering issues, this one nibbled at us, and I just felt that it was somewhat hopeless as the things we had tried didn’t seem to make a difference.

Well, recently I decided to give it another go did some searching.  Something in this article stuck me.

A senior scientist from P&G explained that a perfect glass-etching storm can happen inside a dishwasher if you have these four things: soft water, low soil load, high temperatures, and chelating agents. She went on to say, “Chelating agents, or chelants, are a major part of auto-dishwashing formulations because they form soluble complexes with calcium and other metal ions, enabling them to remove food soils and limescale, soften water, and boost hygienic cleaning action.” When you soften water as I do at my home, you remove the calcium from the water. Uh oh!

To prevent glass etching, she suggested not rinsing dishes and glasses, wash in shorter cycles, not using the pots-and-pans or sanitizing settings, and using a dishwashing product that contains zinc.

So I’ve got all the elements there for the problem.  I tried to find a detergent with zinc, but no-one seems to advertise that, or even show an ingredients list for their products.

I’d read that due to energy efficiency regulations, dishwashers now run much longer than they used to in order to get the same amount of clean.  Ours typically runs a 2 hours cycle, but does have a 1 hour quick cycle.  It makes sense that a shorter cycle gives less time for the detergent to react with the glass, and there is less detergent so it has more of a chance of reacting with the dirt, rather than the glass.

So our approach now is to cut our detergent tabs in half, and run the quick cycle.  So far, the dishes are coming out just as clean, so I am hopeful that our etching problem is also solved.  I think I am going to zip tie some glasses that have previously etched in our dishwasher like I previously did with a Bakelite dishwasher test, and see what happens.

I have high hopes that this will solve our problem.