When parts for your favorite piece of cookware are no longer available, sometimes a little do-it-yourself repairs are necessary.

Problem:  The first few years of the vintage Revere Ware pressure cooker had a gauge rather than a dial.  At the bottom of the gauge sits a gasket, which over decades of use and life, gets dry and brittle and stops working, allowing steam to escape, which provides a false reading on the gauge lower than it should.

This problem was brought to my attention by a customer who had the problem, and when I opened up my pressure gauge, sure enough, my gasket was beyond repair as well. 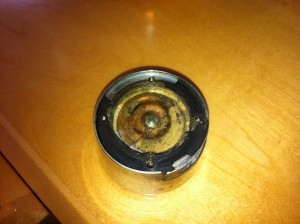 I was able to find some suitable material in the form of a silicone baking sheet, which sounded promising as it was specifically intended for high temperatures and was a food grade silicone.  While the original gasket measured about 3-4/100th of an inch, the silicone baking sheet came in at 6/100th of an inch, a difference I hoped wouldn’t matter.

The original gasket was pretty well attached to the metal, but I was easily able to scrape it off with 1/2 of a pair of wooden chopsticks, a soft material so as not to scratch the metal surface and create grooves that might break the seal. 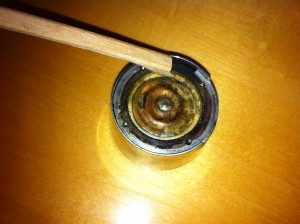 To form the gasket, I pressed down on the silicone sheet with the top of the gauge, which left a nice mark and cut it out with scissors.  I used an apple corer to cut out a hole on the inside.  To create the holes, I sandwiched the gasket between the gauge and the bottom plate and marked them with a small screw driver, and then opened them up with a drill bit. 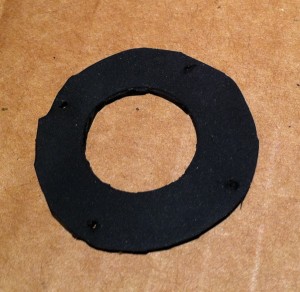 As you can see, it is crudely shaped, but a good enough fit to make a seal. 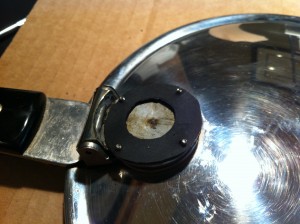 While the gasket is slightly thicker than the original, the screws were easily long enough to hold tight.

A quick pressure test showed the gasket to hold without any problems.

Customer John took a slightly different approach, and went to a shop called Great Western Seal & Gasket (didn’t know places like this existed) and had them punch a suitable gasket out of appropriately sized silicone rubber and then bought a small punch from them to create the screw holes.  I’m sure his looks much prettier than mine, but they both work fine.

View all posts by RevereWareParts →
Vacation
Why isn’t there a screw for the knob on my lid?